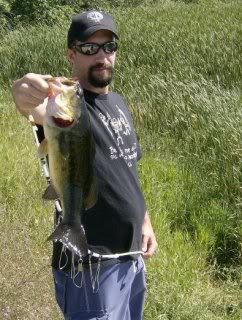 Well… over 28 years ago, when I was the ripe old age of 7, I started smoking. Not long after, I discovered chew while fishing with a friend who had swiped it from his older brother. (back in the day where a 7 year old could go off on his bike alone for a couple of hours without an amber alert goin’ out)

For the next 28 years, I had nicotine in my body. When it got hard to breathe, I would switch to chew. When my mouth would start to hurt, I would either pack it in the top lip or go back to cigarettes. I’m fairly certain my body was convinced that nicotine was produced by a gland. That gland had issues from time to time when I would try to quit, but it would inevitably start secreting nicotine again. Telling my wife (now my ex-wife) I would quit, over and over, and not being able to make it stick, became the norm. Making excuses as to when I would try again, because I was afraid I would fail again and didn’t even want to try, went right along with that. The beginning of the end was February 12, 2007. I did not quit that day, but this day impacted me so profoundly that it was pretty important to my later decision to finally quit for good. I received a phone call from my ex-wife that my oldest daughter (15 at the time) was in the ER and that it looked like congestive heart failure. To make a very long story short, it turned out to be kidney failure, and she had a transplant in July of 2007. But the point of my telling that is that, for several days, it was quite possible that I would outlive my child. She was so young! She’d barely lived yet! She hasn’t fallen in love, had children,…. any of those things that we consider to be involved in a “full” life.

This past July, me, my fiance and my 3 children all went on a vacation to D.C. I ran out of chew on the way home to Minnesota and said “fuck it… I’m done”…

A few days later, while at a bar with several of my fiance’s relatives who all smoke, I bummed a few cigarettes while outside with them talking. Back at it again. FUCK! I was disgusted with myself. My fiance was PISSED! I had already tried virtually every smoking cessation product known to man. The next Monday, I was searching for answers. I found KTC. I signed up. I posted roll. I posted stupid shit to get a laugh. I hit the chat rooms. I couldn’t concentrate on a damn thing related to work or homework anyway… may as well chat.

Here’s a partial list of those responsible for me making it this far… if I miss you, please get the knot out of your panties…. if you’re ever in Minneapolis, call me for a beer..

To all the lumberjacks in November ’08… thanks
Timmay, MadXDipper, JPine, BuckFever, Mule, BBJ, theo, animal, sbtzc, 11X4, franpro, monty, Slug & the rest of the chatters… thanks